Home/Uncategorized/Samuel T: Profile of a WorkWell Graduate
Previous Next

What is the typical ex-offender? People often envision a person who commits youthful indiscretions and emerges from prison young enough to have a go at a new life. But that is not always the case. At WorkWell we encounter trainees of all ages, and it has opened our eyes to the unique challenges facing older returning citizens. 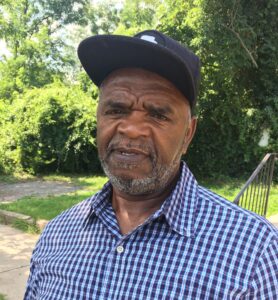 Samuel T (not his real name) spent thirty years behind bars for a crime that he maintains he did not commit. (The Innocence Project is working on his case.) His sentence was so long that prison became, in his words, “the place where I educated myself, and learned to speak and get along with different types.” He received his GED at Trenton State in 1996, and from there seized upon every opportunity that came his way. In addition to earning 29 credits towards an associate degree, he became active in the Kairos Prison Ministry program, sang in a church choir and enrolled in Toastmasters. After moving to Rahway prison, he helped start up a new Toastmasters chapter. Jessie attributes all this success to his faith: “The changes in my life and my ability to survive thirty years in prison are due to my relationship with God.”

Within a year of leaving prison, Samuel signed up for WorkWell training, at that time being conducted with the guidance of Uplift Solutions, a reentry program out of Philadelphia. Sixty-seven years old by then, Samuel had different goals and needs than younger trainees. Samuel is not just a father and grandfather, but a great-grandfather as well. A quiet-spoken, thoughtful man, he impressed instructors with his diligence and serious intention. He valued the program’s mock interviews and the advice he received about not telling personal stories. “You should be professional about everything you do,” Samuel says. Like a good Toastmaster, he gave a heart-felt graduation speech laying out his goals and aspirations.

Since that day, Samuel has had several job offers, one from FedEx as a full-time packer, another as a machine operator in Flemington, NJ. We would like to end the story there, on a high note. But real-life complications enter in: owing to age, Samuel doesn’t have the stamina for physically demanding full-time work. Nor does he have transportation to take him to a job forty-five minutes from home. And so he is biding his time. In Samuel’s words, it is wise “to avoid unreal goals—set do-able goals and take one step at a time. You have to find work you’re going to enjoy, not something that makes you mad.”

There is another reason besides age that makes Samuel turn away full-time work: he volunteers twice a week at the Princeton Deliverance Center, a food pantry where he stocks and serves food to the public. He remains faithful to this calling; community service gives him self-esteem and a sense of belonging.

At WorkWell we often measure achievement by intangibles. And in our book, what Samuel has survived and done over the past three decades marks him a success. Meanwhile, another job offer is pending, and this one is closer to home, in Trenton. Stayed tuned…