WorkWell’s September 12 fundraiser took place on a pristine afternoon when twenty-three golfers hit the links at the Lawrenceville School for a quick six holes. Afterwards they and others gathered for mini-bites and drinks at the manse of the Presbyterian Church of Lawrenceville. The event, which raised over $2,000, also raised awareness about WorkWell’s partnership-oriented mission. Attendees included veterans of New Jersey’s solar, pharmaceutical, and financial industries. The event generated some creative discussion about how WorkWell can move its mission forward through partnerships with regional employers willing to hire returning citizens. Also in attendance were several members of Trinity Church in Princeton, including Rector Paul Jeanes. Trinity recently added WorkWell to its circle of outreach partners, or what it calls “local neighbors.” 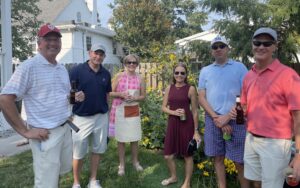 The winning foursome enjoyed Mini-Bites with other friends of WorkWell.

Congrats to the winning foursome, Ted Simpson, Angelo Stio, Dave Everman, and Dennis Cahill; many thanks to organizers Tom Wilfrid and Kirk Huckel; and hats off to Kris Deni and the talented chefs who produced a spread of gourmet sliders, crudites, fruit salad and homemade cookies. Proceeds from the event will be used to support WorkWell’s operating budget.